This guide introduces visual literacy and why it is important. It discusses how to think about, use, and create images and visual media, and provides links to important resources.

Visual thinking includes working with images in our imagination as well as on paper or on the computer. Visual brainstorming tools are one approach.

In her book Writing the Natural Way, Gabrielle Rico refers to “design mind” and “sign mind” as two ways of perceiving and thinking which complement each other:

Creativity may be thought of  as an interactive process between design and sign activities. Design mind is key to creative insights and to finding patterns. Sign mind is the editor; necessary for analyzing and sequencing the insights of the design mind. These correspond roughly to what have been called "right brain" (holistic, generative) thinking and "left brain" (analytical) thinking.

Mind mapping (or what Rico calls "clustering")** is a good way to generate ideas. In starting  this process it is best  to generate a lot of ideas and not worry about which are good or the best way to map them.

In Rico’s approach, you begin with an initial idea and draw a circle around it.  Then you think of associated ideas, circle them, and link them to the central idea. These associated ideas can spawn additional ideas, until you have a web of branches of ideas that are all related back to the original idea.  In some mind mapping approaches it is not necessary to circle associated ideas; you can just as easily write on the branches (see example above).

Through mind mapping, you can discover relationships between ideas, which is much of what creativity is all about – seeing  relationships and patterns in new ways.  At some point in the process you may have an insight or a new sense of direction: a better way of organizing your thoughts, or what you want to express – what Rico calls a “trial web shift.”

Often you won’t get to the best idea until you try a lot of other ideas out.  Feel free to change your mind map, as you wish.  Or make multiple mind maps.

* "Mind mapping" is the term used by English author and mind mapping expert Tony Buzan, as well by many others.

Learning is enhanced through highlighting major concepts and “chunking” material into meaningful groups of content. (Cozolino, 2013). Through chunking, a large or general concept is broken down into sub-concepts or categories, which can then be further broken down. Visual hierarchical maps are an excellent way to chunk content into a structured presentation.

Concept maps are hierarchical visual maps that look somewhat similar to mind maps. Unlike mind maps, which typically are "bottom up" maps used to explore ideas through associations radiating out from a core nucleus idea, concept maps are more of a "top down" approach in which a broad issue or "focus question" is  used  as the starting point for developing a hierarchical structure of concepts all of which are linked. 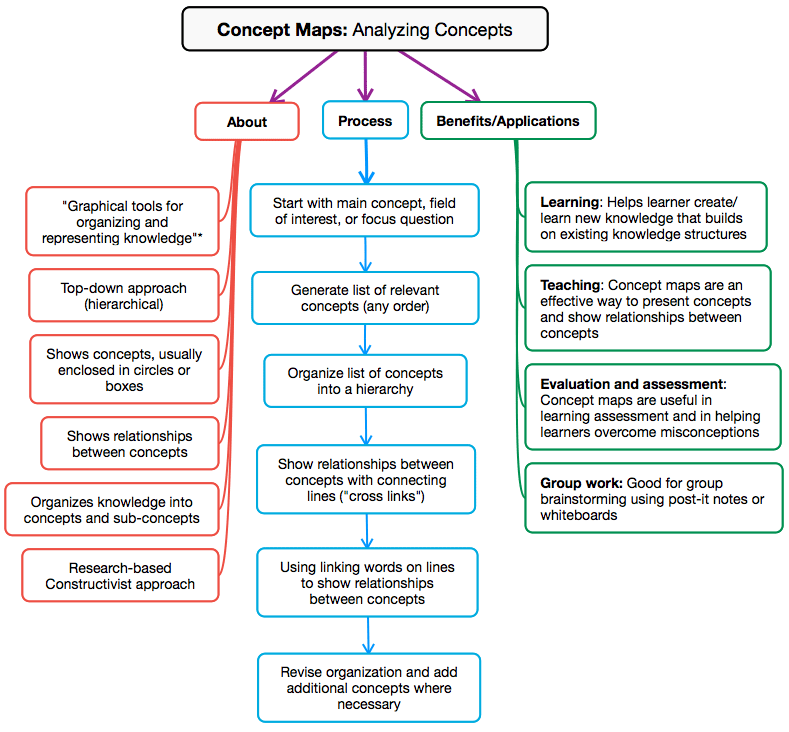 Concept mapping is an approach based on constructivist learning theory, according to which people learn by assimilating new information and ideas into their existing knowledge structures.  This approach emphasizes that learning and knowledge are constructed by the learner, and that understanding and retention of knowledge depend, in large part, on perceiving relationships between concepts.

According to Novak, "it seems evident...that our brain works to organize knowledge in hierarchical frameworks and that learning approaches that facilitate this process significantly enhance the learning capability of all learners" (Novak and Canas, p. 8)

Novak also writes that "iconic learning involves the storage of images of scenes we encounter, people we meet, photos, and a host of other images" and that  while "alphanumeric images [are] quickly forgotten, other kinds of images are retained much longer."  Thus the visual nature of a concept map makes it an effective tool for learning.

For more about concept mapping and the research on which it is based, see this article by Novak and Canas:

How to create a concept map

According to Novak, the best way to create a concept map is to start by constructing a focus question.  Then create and arrange concepts into a hierarchy. An overview of the process is shown in the following diagram.  For an example of a concept map see the example provided by Novak and Canas at http://cmap.ihmc.us/Publications/ResearchPapers/TheoryCmaps/Fig1CmapAboutCmaps-large.png.

Visual Brainstorming Tools: Without and With a Computer

Brainstorming without a computer

A whiteboard and dry-erase markers are a good method.  You can draw large enough so it is easy to view, which is good for working in a group.  It is also very easy to  erase and start over or change your map, which encourages experimentatiion. It is always nice to be able to easily try out different ideas. Also you can use different colored markers, which helps distinguish ideas from each other.

The following is an example of a whiteboard used in planning this guide.  One thing to keep in mind is that if you think you may want to refer to your map later, be sure to either copy it or take a picture of it (unless you have an electronic whiteboard that does this automatically. 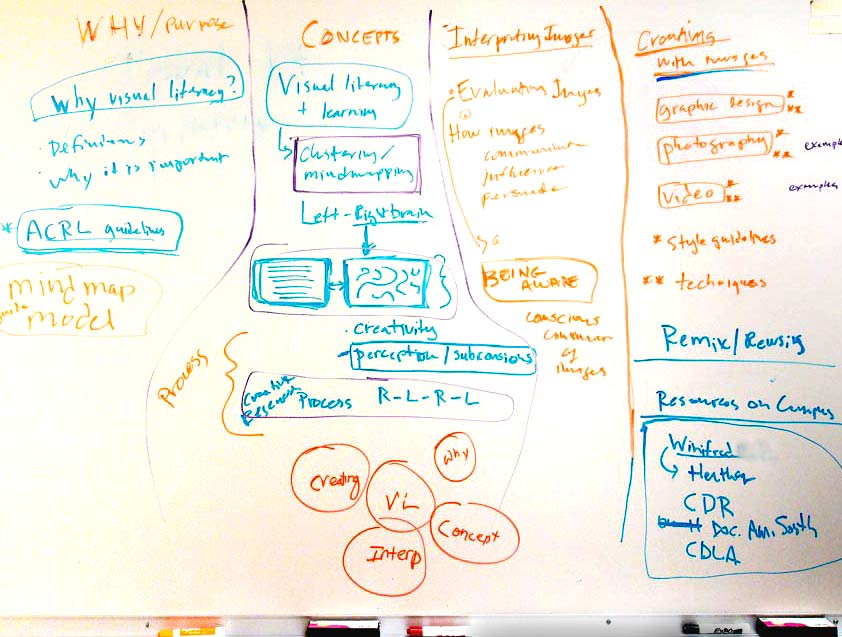 Post-It notes are a great, simple, inexpensive way to do visual brainstorming, especially in groups.  Brainstorm by writing down each idea on a separate post-it note. Then arrange the Post-It notes on a board.

A sketchbook or simply using plain paper with pencils or pens (preferably with multiple colors) is another simple technique. The advantage of a sketchbook is that you can do multiple versions and the sketchbook can contain them all.

Brainstorming with a computer

There are several mind mapping and related software packages on the market. Many are very good. The following are worth considering:

Scapple – An excellent, inexpensive, intuitive, cross-platform tool for creating all kinds of diagrams and maps. For more information, see https://www.literatureandlatte.com/scapple.php.

NovaMind – An excellent cross-platform program designed specifically for mindmapping.  The top-level ("Platinum") version is rather expensive, but the "Express" version is affordable and still quite good.

CmapTools is a made specifically for creating concept maps.  Free, and worth considering if you plan to focus on concept mapping.

In addition to generating ideas, visual brainstorming tools can be used to present information.  The following are especially useful for designing diagrams and graphics for print or online.

OmniGraffle – Excellent, powerful, easy-to-use program; great for flowcharts and all kinds of diagrams. Mac and iPad only.  https://www.omnigroup.com/omnigraffle