This guide introduces important concepts in digital imaging and techniques in Adobe Photoshop.

Keep in mind the following when editing images:

) in the toolbox. Then click and drag across the image. An outline will appear that shows you the area to be cropped. 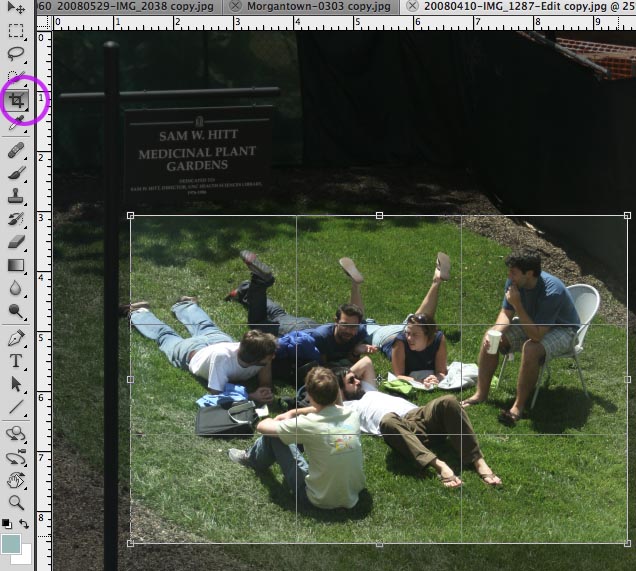 2. Adjust the area to be cropped by using handles on the edges of the image.

Note: If you move the cursor just outside of one of the corner handles, it turns into a curved cursor, which then allows you change the alignment of the selected area. This is useful, for example, to correct a scan of a picture that was in a crooked position on the  scanner.

3. Press Enter to crop or Escape to cancel

The Levels command (Image>Adjust>Levels) is an excellent tool for adjusting contrast. The Levels dialog box displays a histogram of the brightness values of the pixels in your image. There are two sets of sliders (triangles): input levels and output levels. For most editing tasks, use the input levels sliders (the three triangles just below the histogram). 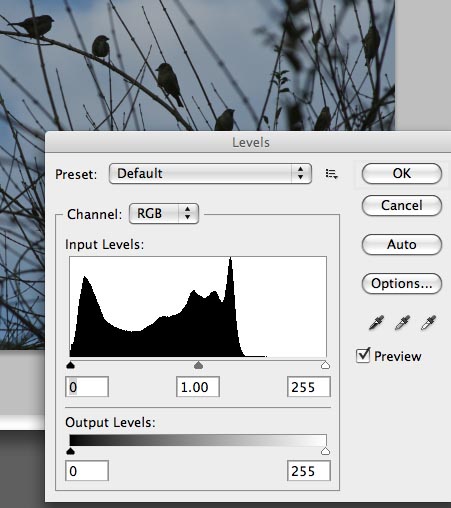 In the above example, there are few (if any) pixels that are white or even light gray. By moving the right slider towards the middle, we can lighten image to correct the exposure. Because the Preview box in the layers palette is checked, we can see the result on our image as we adjust the sliders. 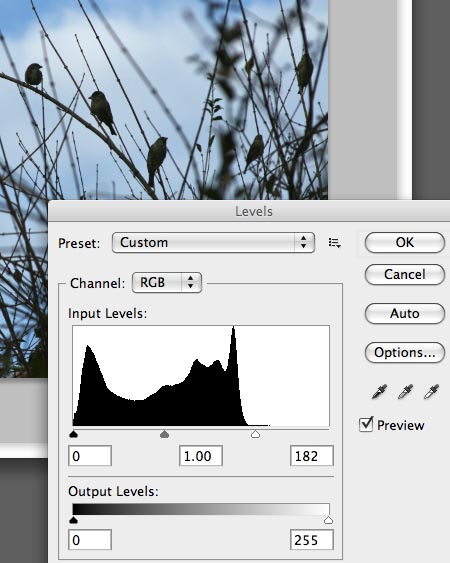 Note: In the above example, the Levels dialog box Channel popup menu is set to the default of RGB, which means the histogram represents a combination of all of the channels (Red, Green, and Blue light) in the image. You can use Levels on an individual channel, but this is likely to change the color balance of the image, so in most cases is not likely to be a good idea.

Note: The Levels command is often a good way to get a more even distribution of briightness of pixels. But this is not always desirable. For example, a properly exposed photograph of something dark such as a coal mine whould be dark, and an image of a snow scene would be white. In such cases the histogram would be lopsided.  In such a case there may be no need to make an adjustment in the Levels dialog box.

There are several ways to adjust color, many of which are under Adjustments in the Image menu, including Color Balance, Color Mixer, and Photo filters. These tools are easy to use and the best way to learn about them is to open a practice image and choose one of these commands, and experiment with the settings in the dialog box that appears for the command.

Choose Image>Auto Color to use the Auto Color command and see if you like the results.

The following is an example of an image before Auto Color was applied. The image is good but slightly more blue than I would prefer: 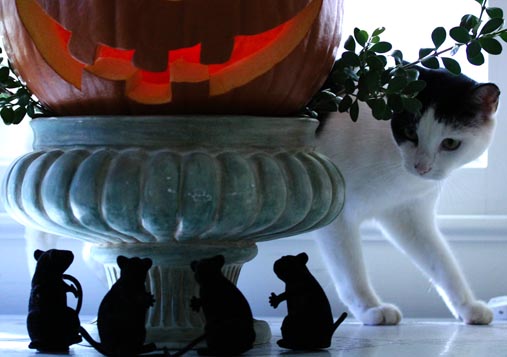 The following is the image after applying Auto Color.  The difference is subtle, but Auto Color added a little warmth to the image. 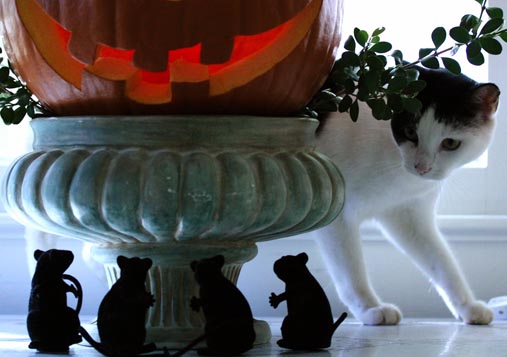 ), also called the rubber stamp, allows you to remove imperfections such as dust and scratches by covering them with samples of nearby pixels. For best results, zoom in close and use a small brush.

1. Zoom in close to the area you want to edit.

2. Choose the clone tool, and make sure "aligned" is checked in the Options bar.

(Note: if the cursor doesn't show the brush size, go to Edit>Preferences>Display & Cursors, and choose Brush Size for Painting Cursors.)

5. Move the cursor over the area you want to cover, and click to cover it with the sample.

The steps for using the healing brush tool (

) are the same as for the clone tool. The healing brush attempts to take the texture from the sample without affecting the brightness of the area to which it is applied. In some cases this is more effective than the clone tool.

Use Filter>Sharpen>Unsharp Mask to sharpen an image. In the dialog box that appears, keep the preview box checked. This allows you to see the effects of different settings. 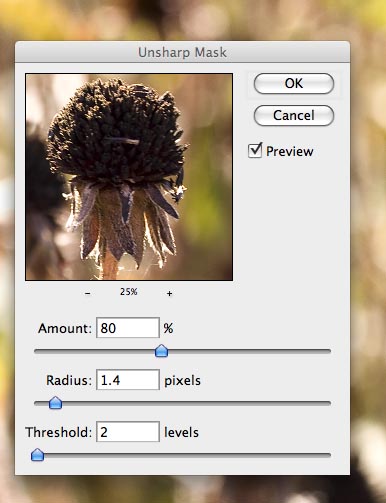 Amount -- How much sharpening is applied. Consider using a value between 50% and 150% for typical images.

Threshold -- Defines what brightness difference qualifies as an edge (0 is default, sharpens all pixels). Consider using a value somewhere between 1and 5 (for Threshold, the higher the value, the less pronounced the sharpening effect).

Note: Sharpening is more an art than a science, and is somewhat subjective. The above settings are only suggestions. For best results, you need to look at the particular image and figure out for yourself what looks best!  Make sure that in Photoshop the image is at 100% magnification, and keep the Preview box checked in the Unsharp Mask dialog box .