This guide details the winding history of the creation of the Department of Allied Health Sciences at UNC-Chapel Hill, as determined by archival research. It reveals the people and processes involved along the way.

The History of the Creation of the Department of (Allied) Health Sciences at UNC: A Summary

The development of the North Carolina Memorial Hospital, which opened in 1952, allowed a Physical Therapy Rehabilitation program to open in the newly-expanded UNC-Chapel Hill School of Medicine, and much of the allied health personnel training was accomplished through the hospital. Other allied health programs were spread throughout different schools of the university, left without much direct organization other than a coordinating officer in the Dean's Office of the School of Medicine.

Beginning in the mid-1960s, the education of allied health professionals in the state of North Carolina and more specifically, UNC-Chapel Hill, began to receive more attention and consideration for expansion. In 1966, the United States Congress passed Public Law 89-751 designating funds for "the development of training programs for allied health professional groups relating to medical and health services." A few months later, Dr. C. Arden Miller, then Vice-Chancellor for Health Affairs at UNC, began to take actions in order to receive those funds. So began the expansion of the Allied Health Sciences at UNC-Chapel Hill.

Over the next few years, a series of committees organized by the Vice Chancellor for Health Affairs (also known as Health Sciences Division during this time period) would assess the state of allied health education in North Carolina, hearing statements from a number of interested parties and discussing how best to proceed with expanding allied health programs at UNC. Under different Vice Chancellors, Deans, and a few committee member changes, the Allied Health Committee presented a final report at the end of 1969 detailing three different plans but emphasizing their recommendation for a School of Allied Health Professions in the Health Sciences Division. For over a year, discussion continued on this topic, with many faculty, students, and alumni expressing their interest in the establishment of such a school.

However, not everyone involved was as excited as, say, the Division of Physical Therapy (see letter of January 21, 1970), at the thought of a School of Allied Health Professions. In April 1971, the same month that the School of Allied Health was officially proposed, the School of Medicine decided not to support the school, in favor of a Department of Allied Health Professions. This sentiment became known to the Vice Chancellor for Health Affairs, then Dr. Cecil Sheps, in May of the same year. Several months of confusion followed, with some parties trying to move the proposed school forward while the School of Medicine continued to move towards establishing a department. 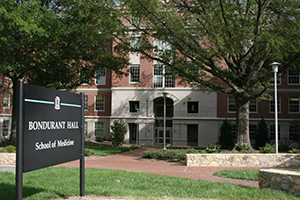 This guide was created by:

With special thanks to: