A Guide to Researching Campus Monuments and Buildings: Home 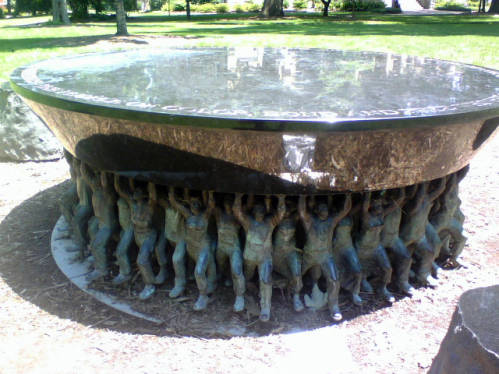 This guide is designed for researchers interested in the history and controversy of the physical landscape of the University of North Carolina at Chapel Hill - its monuments, buildings, and spaces. Resources related to the "Silent Sam" Confederate Memorial, the two Caldwell Monuments, "The Student Body" Statue, and the Unsung Founders Memorial are listed in this guide. These resources include books, articles, photographs, and archival resources from the collections in Wilson Special Collections Library. As an example of how one could approach researching a campus building, one tab features resources about Carolina Hall (formerly known as Saunders Hall). The final tab lists resources on the general history of UNC-Chapel Hill and its campus. Tips for locating additional resources are also provided throughout.

Members of the UNC community have long called for many building names to be reconsidered. Dozens of buildings on the campus are named for people with ties to white supremacy. In 2015, after voting to rename Saunders Hall to Carolina Hall, the UNC-Chapel Hill Board of Trustees voted to enact a 16-year moratorium on renaming campus buildings and landmarks. In early 2020, a grassroots and student-led petition called for the moratorium to be lifted, among other demands, garnering thousands of signatures. On June 16, 2020, the Board of Trustees voted to end the moratorium on renaming campus buildings and landmarks. The first buildings to be considered for renaming after the moratorium were Aycock Residence Hall (Charles B. Aycock), Josephus Daniels - Student Stores, Carr Building (Julian S. Carr), and Ruffin Residence Hall (Thomas Ruffin).

This guide was created in Summer 2015 by Brooke Guthrie and subsequently updated by Sarah Carrier.