In the podcast studio, you can record podcasts or any audio files using our studio quality mics and headphones.  Just bring your laptop with your favorite recording software, plug in the USB and you are ready to record.  If you don’t have your own software, we recommend getting the Adobe Creative Cloud, available at no cost for students.  Reservations are required prior to room use.  Make sure to check out our instructions on how to make a podcast and use our podcast storyboard.

Before You Leave the Podcast Studio

There are four Shure SM7B microphones, windscreens attached, in the podcast studio. They are attached to the table by a boom arm.

The podcast studio is equipped with a RØDECaster Pro. Each microphone connects to the RØDECaster Pro by an XLR cable. There are also four Sennheiser HD280 headphones and a USB-A cable connected to the mixer. Patrons may use the USB cable to attach their laptop to the mixer and record directly into an audio editing program of their choosing.

All audio files recorded to a microSD card using the RØDECaster Pro will be a poly .WAV file. When placed into an audio editing program (our example is with Adobe Audition), it will look similar to a stereo file, except with more waveform lines. There will be as many waveforms as input tracks from the recording setup. The RØDECaster Pro will record 14 tracks. Note: many media players are unable to play poly .WAV files, meaning that they must be imported to an audio editing software in order for the sound to be heard.

To extract the individual tracks, click the arrow in the Files panel in the top left corner of the default Adobe Audition workspace. Doing so will show the individual tracks that make up the full poly .WAV file. You can then click and drag the track to the main timeline. 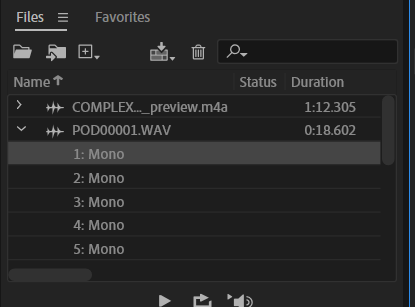 By default, recording directly into an audio editing program via the USB cable and a laptop will result in one track containing all recorded audio, no matter how many microphones and other inputs are used. Recording each input to its own track on a laptop is a more involved process. RØDE provides step-by-step instructions for a variety of audio editing programs.

The Media & Design Center staff are available to answer your questions on using equipment, finding films, and creating posters or podcasts!

Need instruction for your students in the Adobe Creative Suite or WordPress? We can help!