On the Move: Stories of African American Migration and Mobility: Double V Campaign

The Double V Campaign, launched in 1947, was an initiative designed to highlight the plight of African American military personnel as they worked to fight for American principles overseas during World War II while fighting for their own rights as Americans in their hometowns. The experiences of the Tuskegee Airmen exemplified this injustice. The nation's first black military pilots, they fought valiantly in the war but were barred from any other flight school in America because they were African American. African American airman stationed at Fort Bragg in North Carolina in the 1950s faced the same restrictions to their civil rights.

"I wanted to go into the service and felt this was my country.... And even though some forces in the country would deny me full citizenship, I felt I had just as much ownership in this country as anyone else. And should it become my turn to fight for my country, I would certainly do that with as much pride, honor and vigor as anyone else." - Lt. Col Harry Stewart Jr. 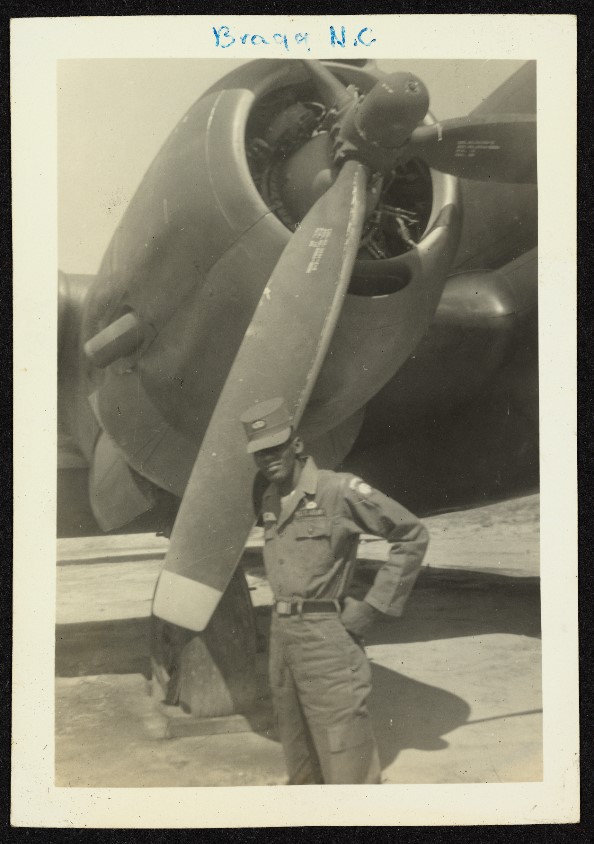 The collection of African American soldier Albert Lockhart consists of a photographic album of black-and-white and color photographic prints. The images created between March and September of 1961 at Fort Bragg, N.C., depict training exercises and the daily life and living conditions of soldiers in the United States Army 82nd Airborne Division and the Parachute Field Artillery Battalion.

President Truman signed Executive Order 9981 in 1945 to de-segregate the military but it took a long time for the Army to subscribe. Airborne status is typically a highly sought-after designation but early Black soldiers with that status still had menial jobs and were not allowed to see combat. By the time Albert Lockhart joined the 82nd Airborne Division at Fort Bragg in 1961, the Black Parachute Infantry Battalion had established itself as “smoke jumpers” for putting out forest fires on the West Coast set by Japanese incendiary balloons and distinguished service during the Pearl Harbor attacks.

Although born in Columbus, GA, Eugene Bullard earned his wings from an aviation school in Tour, France in 1917. He went on to fly for the French military in World War 1 and serve as a spy for the Allied Forces in World War 2. While Ballard’s life outcomes are exceptional – his experiences of racism in the United States were not. After his success and accolades abroad, it was not until 1994 that the United States Air Force recognized him and posthumously commissioned him a Second Lieutenant.

The United Service Organizations (USO) is designed to provide a “home away from home” and handle on leave recreation for the soldiers. The Newberry Street USO in Jacksonville, NC was established on April 23, 1942 and served the first African American Marines. The Visitor book for the United Service Organization at Camp Lejeune in Jacksonville, NC from 1945-1947. African American soldiers had a separate USO club due to segregation laws in North Carolina. Soldiers visiting this location wrote down their experience with the USO often followed by their name, rank, and address.

A very special bond exists among the African American men who trained at Montford Pointe between 1942 and 1949. Their participation in the Marines is book ended by two executive orders from two different Presidents and coincides with a reluctant and hateful shift in military demographics. Although the African American men were stationed near Camp Lejeune, they were not allowed to visit unless they had a white escort. James Felton, a civic leader from Hertford County, NC joined the Marines in 1943 and spent three years at Montford Point.

The collection consists of materials documenting teacher and community activist James A. Felton's life, focusing on his civic activities and achievements, especially those related to the C. S. Brown Regional Cultural Arts Center and Museum and the People's Program on Poverty. It includes correspondence; programs for meetings and events held by educational, religious, and civic organizations; and newspaper clippings describing Felton's civic contributions in Hertford County, N.C. Also included are a short biography of Annie Vaughan Felton and some materials that she collected after her husband's death. Photographs show James A. Felton throughout his adult life with his family, his colleagues, and his students at the Migrant and Seasonal Farmworkers Training Center. The Addition of August 2014 consists of personal and professional papers of James A. Felton and Annie Vaughan Felton, chiefly relating to civic engagements, including the C. S. Brown Cultural Arts Center and Museum, People's Program on Poverty, the North Carolina Family Life Council, and the Montford Point Marines. Documents include correspondence, sermons, event programs, photographs, reports, and newsletters. 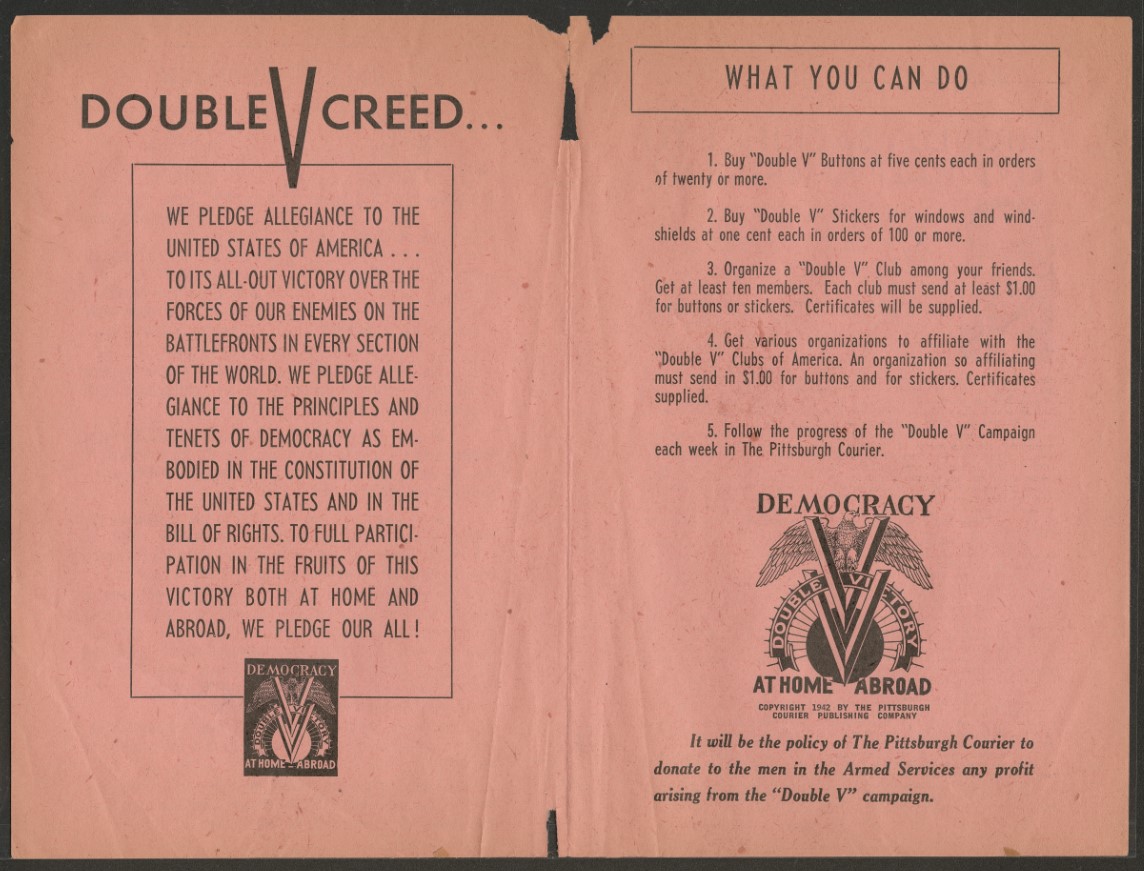 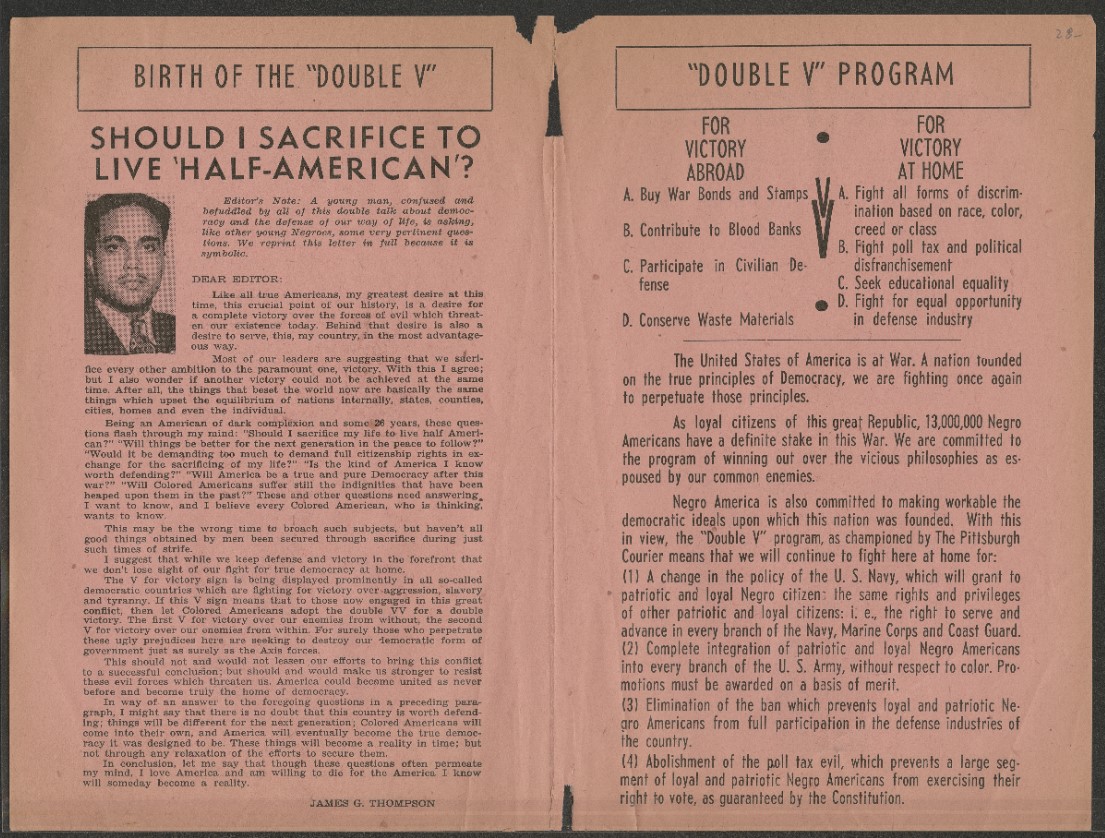 The Double V campaign drew on the power of the Black press to articulate the emotional status of the majority of Black Americans. As the newspaper was frequently called to report on racial oppression, it was also well positioned to point to the hypocrisy of Black soldiers fighting for a country that openly terrorized them. The campaign was first introduced in a 1942 edition of the Pittsburgh Courier and continued in the Chicago Defender as well as smaller Southern papers in Norfolk and Durham.