On the Move: Stories of African American Migration and Mobility: Green Book

From the 1940s, the emerging African-American middle class bought cars as soon as they could. Cars gave them a new personal independence, but against a backdrop of danger and inconvenience as they were refused food and lodgings on their travels. There was a prevalence of “sundown towns” or places where African Americans were not welcome to stay after the sun set. The popularity of The Negro Motorist Green Book, an annual guidebook for African-American road trippers, was a strong signal that African Americans had the means for leisure and weren’t going to let segregationists stand in their way.

“Really, certain whites didn’t like to think you had leisure to do anything but pick cotton and work in the field.... Just generally, if you were black, you were not supposed to have either time or money, and if you did, you ought not to show it.” Mamie E. Garvin Fields, Lemon Swamp and Other Places: A Carolina Memoir

“Would a Negro like to pursue a little happiness at a theater, a beach, pool, hotel, restaurant, on a train, plane, or ship, a golf course, summer or winter resort? Would he like to stop overnight at a tourist camp while he motors about his native land ‘Seeing America First?’ Well, just let him try!” - The Crisis magazine (1947) 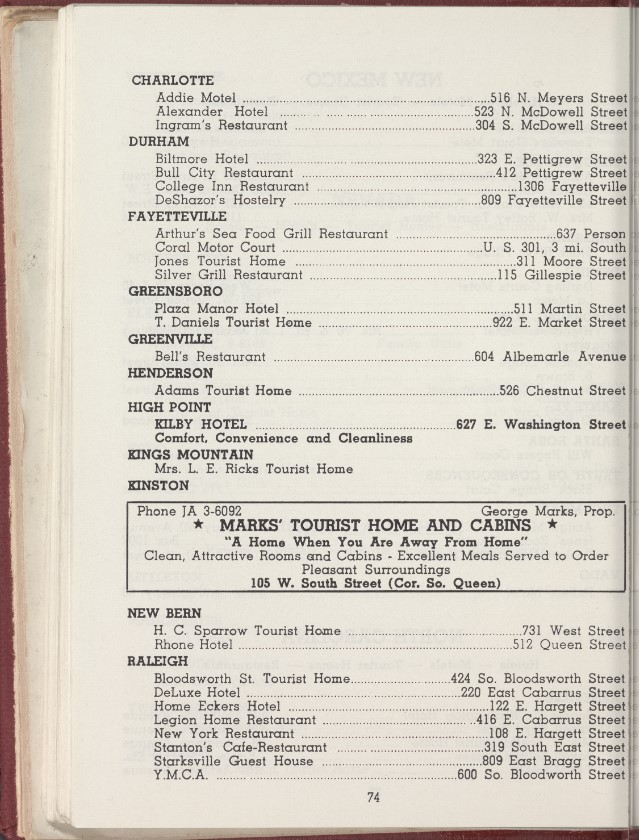 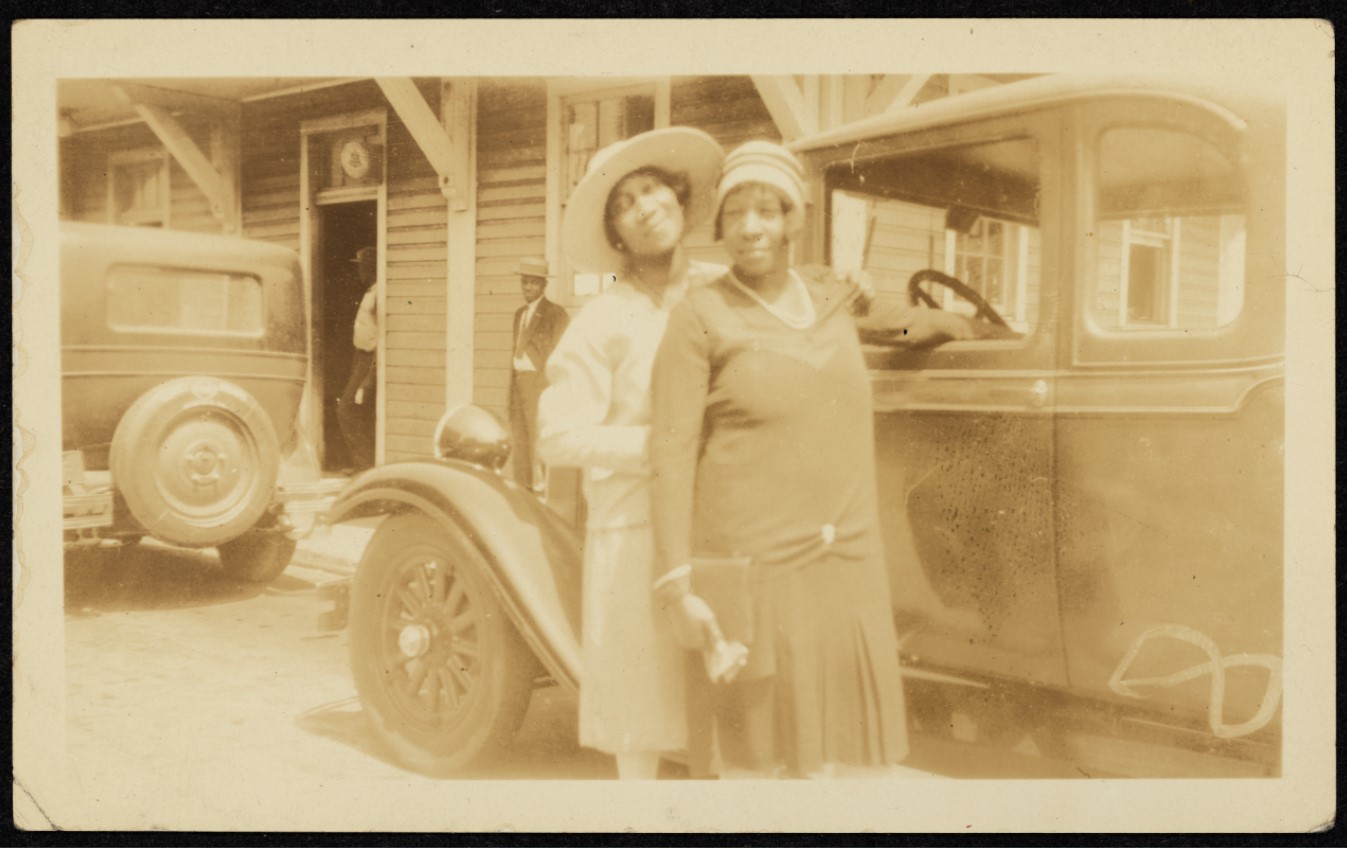 The McLean family papers document Willard James McLean of Selma, N.C., and his family members, including his second wife, Anna Allen McLean, his third wife, Fannetta Morrow Scruggs McLean Warner, and his stepdaughter, Karen Scruggs. The collection documents a family of African American educators who taught in segregated schools and pursued continuing higher education opportunities, and contains correspondence, financial material, and professional papers of Willard James McLean, as well as papers related to Willard's involvement in the Presbyterian church and printed material. Correspondence, 1940-1971, comprises the bulk of the collection: through 1951 correspondence is primarily of Willard and Anna, of Willard through 1961, and progresses to letters primarily from Karen Scruggs while she is away at various schools, 1962-1970. The collection also contains family photographs and short audio messages and songs recorded by the principal and students from Annie W. Holland School, an African American school in Rocky Mount, N.C.

This fairly banal letter between two high school friends illustrates a couple of important reflections about mid-20th-century African American migration and social mobility. Mary Lee Morrow is from rural Alamance County, NC and has made her way north to Atlantic City, NJ for more opportunities. In her letter, Mary Lee talks about going to see a “picture,” getting ready for prom, and the pursuit of a new boyfriend this summer. Access to cars and interstate travel is part and parcel of these middle-class experiences.

This collection consists of personal and family correspondence of the Foust family, an African-American family living in rural Alamance County, N.C., concerning their daily lives, efforts to make a living, and education, including Edna Lee Foust's training as a nurse. Also included are students' notebooks, test papers, essays, and other educational material.

This photo album includes a young African American woman and her friends on vacation, at home, around school, and World War I soldiers in uniform. These images from Yorktown Beach in Virginia from May 1922 are especially interesting given the history of segregation at public beaches and that around that time three years earlier, African American military veterans were attacked in nearby Norfolk, VA. This episode was one of hundreds of incidences of racially motivated violence occurring across the country in 1919, sometimes referred to as the Red Summer.

Mary L. Woods was an African American woman from Smithfield, Va. The collection is a photograph album belonging to Mary L. Woods containing 69 snapshots of friends and family members, labeled with names, dates, and comments. The images are posed portraits of African Americans, including a few children; they were taken outdoors in rural settings, urban settings, and at the beach. Locations mentioned include Smithfield, Va., Yorktown, Va., Portsmouth, Va., and Washington, D.C.

This photo depicts an African American couple sitting on the running board of a Ford Model T car in the early 1940s. The Model T (1908-1927) was one of the most affordable and popular cars ever built. The production of Model T cars revolutionized manufacturing in many ways and the Ford company provided a pull factor for the thousands of African American workers who moved from the South to Detroit, MI. Henry Ford spoke highly of his prized innovation as a symbol of America’s rising middle class and how it would allow families to travel with ease.

Alfred Eric Stepney was an African American enlisted soldier in the United States Army stationed at Fort Bragg, N.C., in 1942. He was from White Plains, N.Y. The collection consists of a photographic album and several loose black-and-white prints. Many of the photographs appear to have been taken outside the barracks at Fort Bragg in 1941 or 1942, and include African Americans and a few white people. Other prints, some apparently from an earlier date, include family and friends in unknown locations. Also included is an undated Fort Bragg "Pass Card" for E.A. Stepney.

Billie M. Lytle Morehead West lived in Evanston, IL, but had roots in Black Mountain, NC. Mrs. West is pictured here in the driver’s seat of her brand new 1952 Chevrolet Deluxe four-door sedan. The Deluxe was the top selling car in the 1940s and Mrs. West opted to have chrome tips bolted to the stock bumper to dress it up a bit. Her pride in ownership comes through in all six photos of her alongside her car.

The Graggs are an African American family from Black Mountain, N.C. Family photographs comprise the bulk of their collection, and the vast majority of photographs pertain to Butch and Kathryn Gragg's children, Harold Jr., Mavis, and Monica, when they were growing up and entering adulthood from the 1970s through the 1990s. Events depicted include ceremonies and activities for the Girl Scouts and Boy Scouts; school-related functions; sports; graduations; vacations; and the Gragg family home life. Earlier images depict Butch Gragg and Kathryn Whitson (Gragg) in their adolescence and their parents. The papers are chiefly records, such as death certificates, wills, deeds, life insurance policies, personal identification, selective service registration cards and discharges from military service of individual members of the Gragg and related families. Surnames of related families are Whitson, Moorehead, Morehead, Lynch, Logan, and Creasman. Other materials include funeral programs, genealogical information, newspaper clippings, scrapbooks, engagement calendars and childhood diaries of Kathryn Whitson Gragg, scattered family correspondence, and spoken word sound recordings. The addition consists of letters, 1953-1971, to Frances Whitson, the mother of Kathryn Whitson Gragg, that document her relationships with Kathryn's father, Bruce Morehead, and his mother and wife. Also included are letters from Joseph Lowery, a cousin serving in the military and writing from Hawaii and South Vietnam; school materials from Asheville, Swannanoa, and Black Mountain, N.C.; and Bruce Morehead's snapshots of family and military barracks. 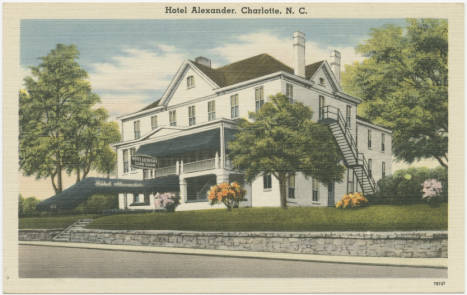 The caption on the back of this postcard reads, “Hotel Alexander, one of the Nation’s Finest and most exclusive and newest Negro Hotels, Charlotte, NC, McDowell at Ninth.” 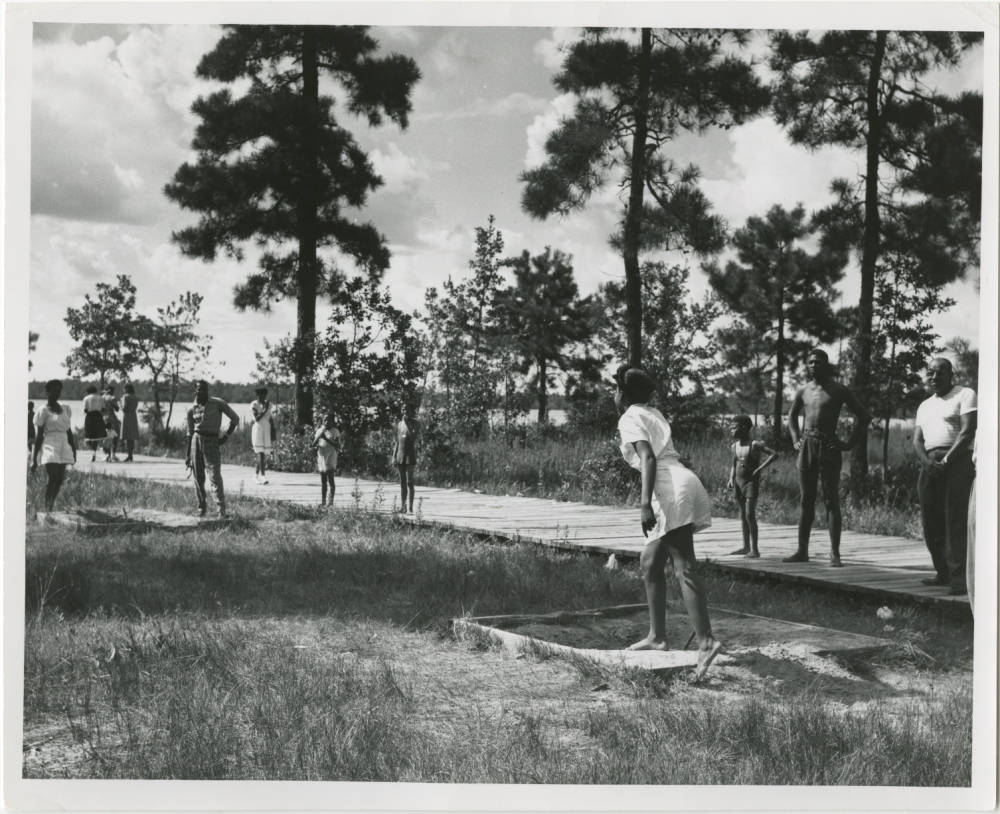 In this image from the 1950's, an African-American family plays a game of horseshoes at Reedy Creek State Park, a segregated park in Wake County, North Carolina.