In the mid-1980s, UNC-Chapel Hill students led an anti-Apartheid movement on campus to successfully influence university administration to divest from companies operating in South Africa. The student organization Anti-Apartheid Support Group officially formed at UNC in 1985 after years of activism on campus largely led by the Public Research Interest Group (PIRG). Student, faculty, and community support for divestment swelled with the leadership of the Anti-Apartheid Support Group. Protest activities included building a shanty town at South Building and occupying the Chancellor's office. In 1987, UNC-Chapel Hill officially divested from South African companies.

The Yackety Yack is the student yearbook at UNC-Chapel Hill. The yearbook tended to feature photographs of Anti-Apartheid protests and other activism on campus not available in other publications. UNC-Chapel Hill yearbooks are digitized and available through year 1991 for free via the North Carolina Digital Heritage Center.

Published since 1893, the Daily Tar Heel is the primary student newspaper at UNC-Chapel Hill and includes coverage of all student protests through news articles, photographs, editorials, and letters to the editor. The paper can be accessed on microfilm in the North Carolina Collection. The paper is freely available through December 5, 2008 via the North Carolina Digital Heritage Center. Library patrons or users affiliated with UNC have free access to the paper via the database Newspapers.com.

Black Ink is a news source published by the Black Student Movement at UNC-Chapel Hill. Issues from November 1, 1969 – December 1, 2001 can be accessed in the North Carolina Collection and online via DigitalNC. 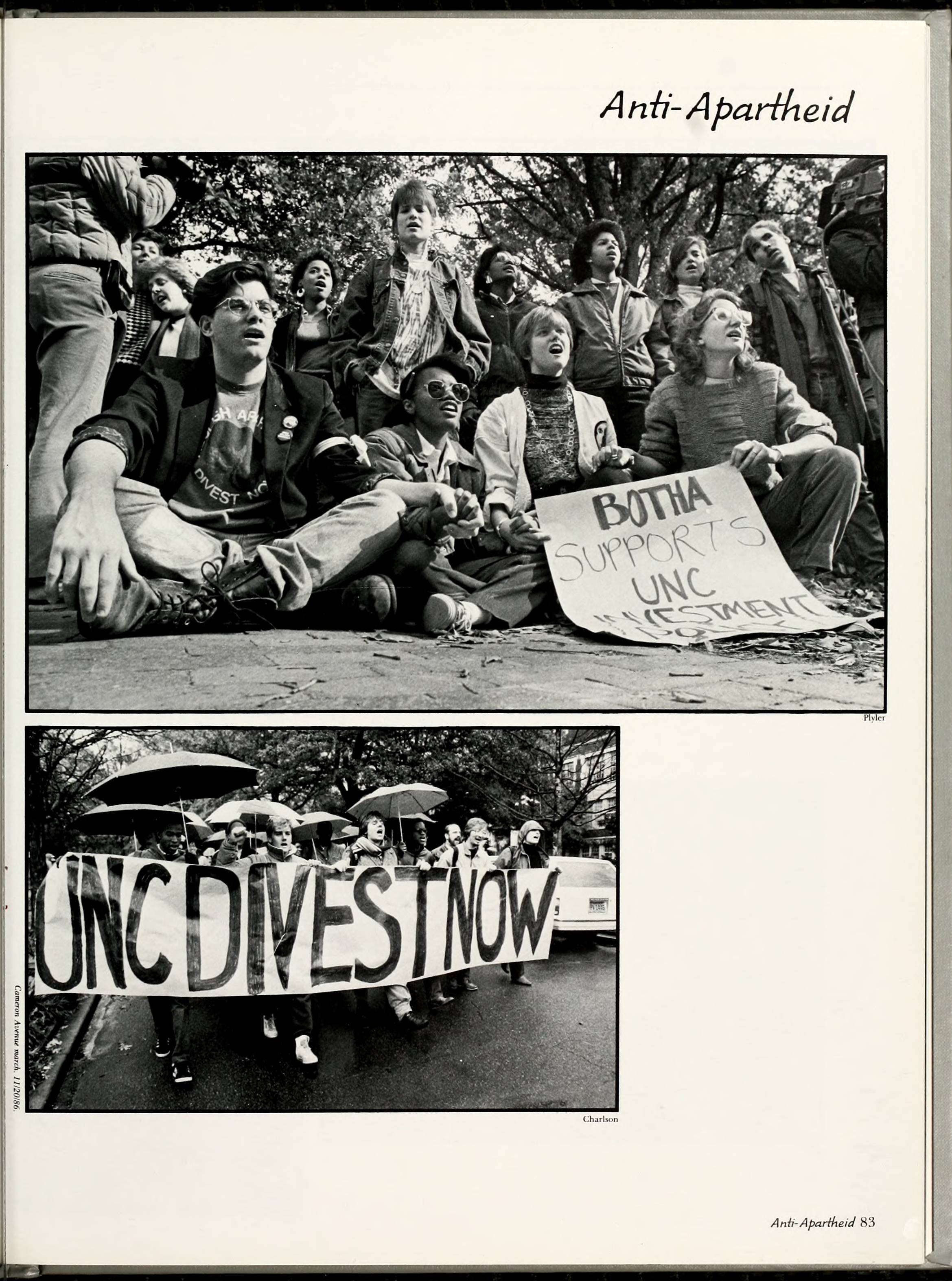 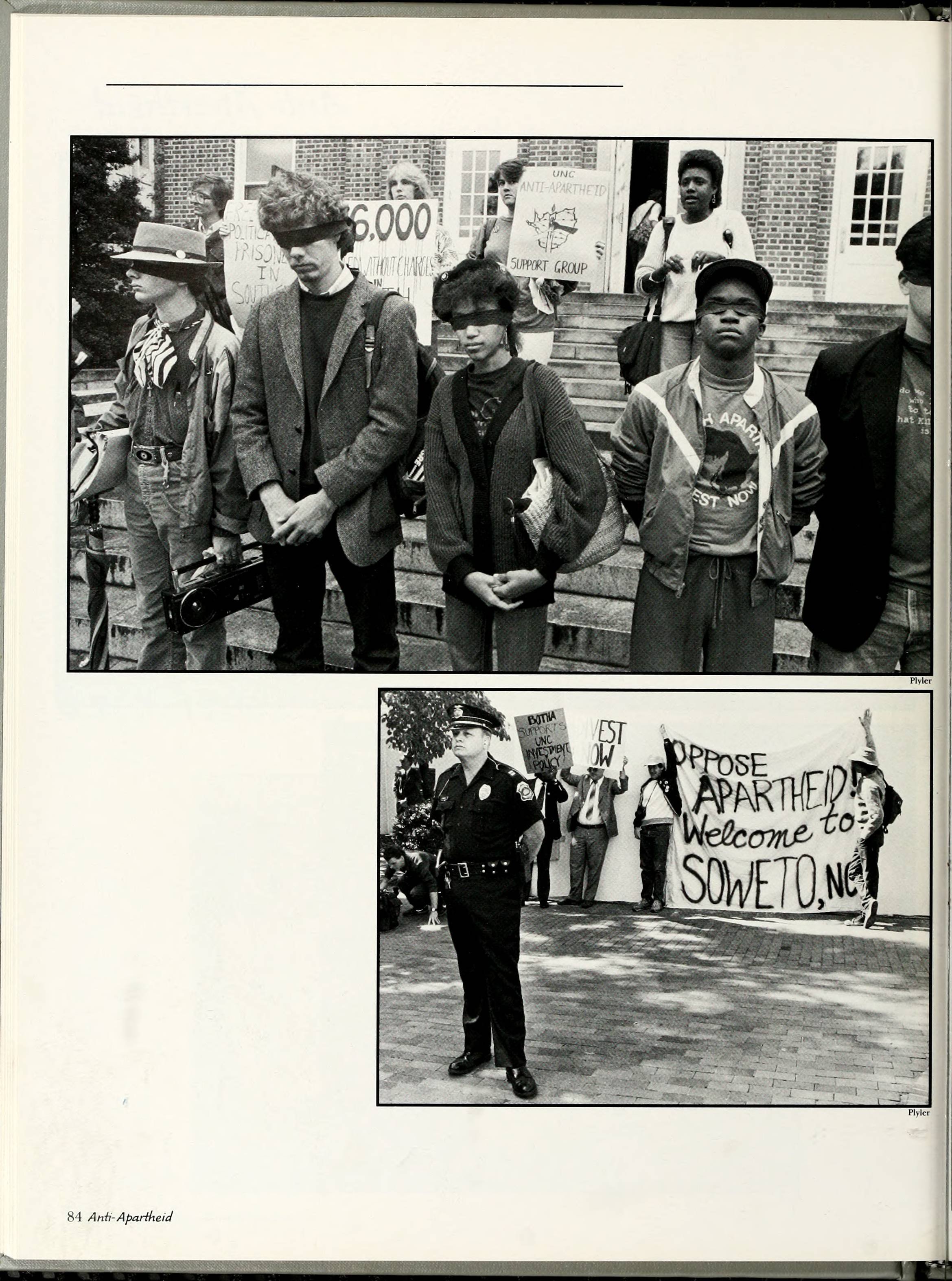 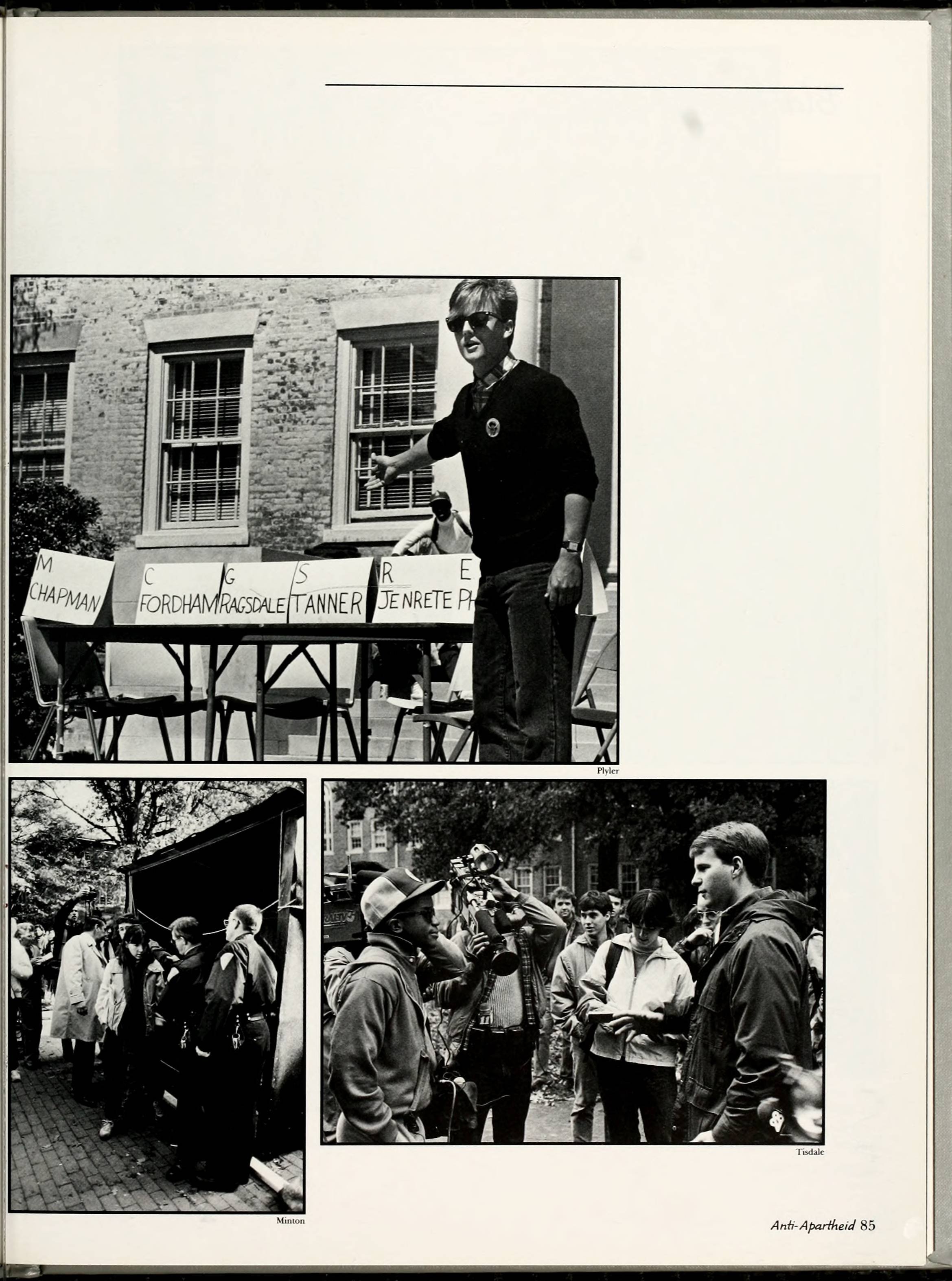 Anti-Apartheid Support Group of the University of North Carolina at Chapel Hill Records, 1980-1987

Carolina Union of the University of North Carolina at Chapel Hill Records, 1931-2014

Other activists and entities associated with UNC-Chapel Hill and the Town were very active in Anti-Apartheid protests. These include:

John Kenyon Chapman (1947-2009), known as Yonni, was a life-long social justice activist, organizer, and historian who focused his academic and social efforts on workers rights and African American empowerment in central North Carolina.

Chapman became involved with the Workers Viewpoint Organization, a diverse nationally active progressive organization that was involved in many workers rights and racial justice campaigns, as well as African liberation and anti-apartheid struggles, in and around Greensboro and Durham, N.C. In 1979, he joined the Communist Workers Party, a radical Maoist political organization with militant and strongly anti-capitalist principles that focused its efforts chiefly on unionization and civil rights. On 3 November 1979, the Communist Workers Party held an anti-Ku Klux Klan rally in Greensboro. Armed members of the Ku Klux Klan and the American Nazi Party arrived at the rally and opened fire, killing five Communist Workers Party members. This event is known as the Greensboro Massacre, and the victims are remembered collectively as the CWP-5. Chapman was present at the Greensboro Massacre, an event that helped to solidify his commitment to social justice advocacy. He remained an active member of the Communist Workers Party until it dissolved in the early-mid 1980s.

The War Resisters League (WRL) was founded in 1923 by pacifists who had opposed American entry into World War I. League members have been active in organizing opposition to American involvement in military conflicts, including World War II, the Vietnam War, and the Persian Gulf War. The League also was involved in the civil rights movement in the 1950s and 1960s, and has also supported the women's movement, the anti-apartheid struggle in South Africa, and other social justice causes. The Southeast Regional Office of the War Resisters League was established in 1977 in Chapel Hill, N.C., for the purpose of supporting WRL activities and other peace and social justice groups in the southeastern United States. A few years later, the office moved to Durham, N.C., where it operated until 1989.