This page points to specific documents and materials held by Wilson Special Collections Library speaking to the buildup, event, and aftermath of the November 1898 massacre and coup in Wilmington. Additionally, resources on this page are arranged to clearly reveal the orchestrators' explicit connections and networks with the University of North Carolina.

The Manly Brothers and The Daily Record 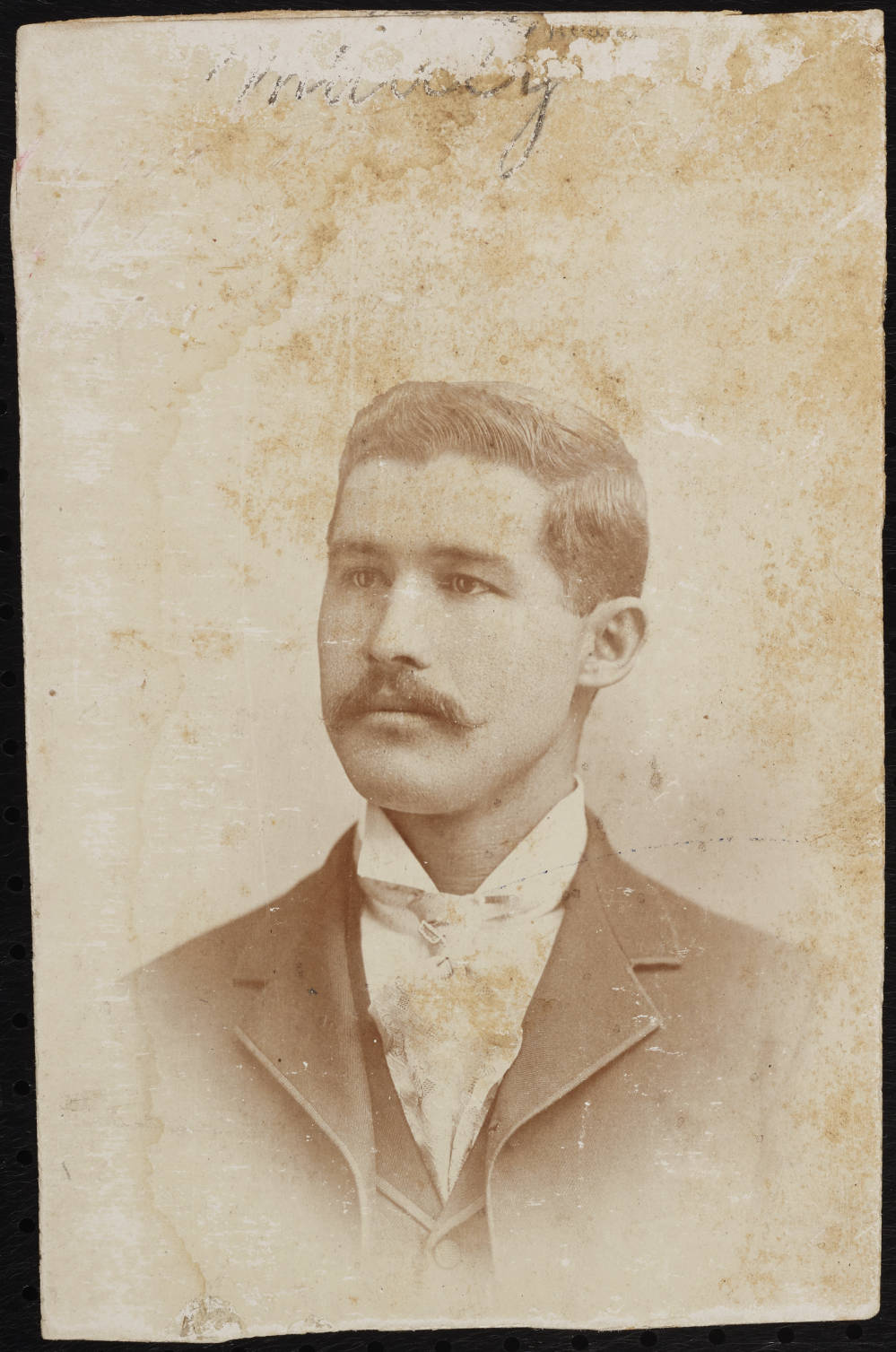 Names of murdered victims of the Wilmington November 1898 massacre and coup, as reported to the Coroner:

The total numbers of fatalities, and the names of all the victims, all Black, are not recorded.

As LeRae Umfleet so clearly articulates in her research and report, Democratic Party member Josephus Daniels himself credited a "three-pronged attack" in the white supremacist takeover of Wilmington and the State of North Carolina. This was led by new Democratic party chairman, Furnifold Simmons. Simmons received an honorary degree from UNC in 1915 and his papers are held at Duke's Rubenstein Library. The three prongs of the attack are useful for organizing Wilson Special Collections resources as follows:

LeRae Umfleet lists the Leading 1898 Conspirators in her research and report:

It was demanded that the offending negro editor leave the city within twenty-four hours, never to return, and that the press on which his paper was published be shipped away. A number of
negro ministers and other reputable members of the race were asked to use their influence to see that these demands were met peaceably and to respond within a given time. Owing to the failure on the part of a negro to deliver the reply within the specified time, the white citizens, after waiting far beyond the appointed hour, marched to the office of the paper and destroyed the printing press and other equipment. By accident and not by intention, fire resulted, and the building was destroyed, to the regret of the white people. Bloodshed, as Colonel Waddell stated in the foregoing quotation from his Memories, was begun by the negroes, it being the purpose of the white people to avoid all bloodshed and needless violence. On the evening of the day of this revolution, the mayor and board of aldermen then in charge of the city of Wilmington resigned, and their successors were nominated and elected. Thus there was an entire change in the city government, and the order of things then instituted has continued uninterrupted ever since. The effect of the change upon the prosperity of Wilmington was most happy, and the city then took a start in progress which has never ceased.

-- from Peace Restored in Chronicles of the Cape Fear River, page 555, by James Sprunt 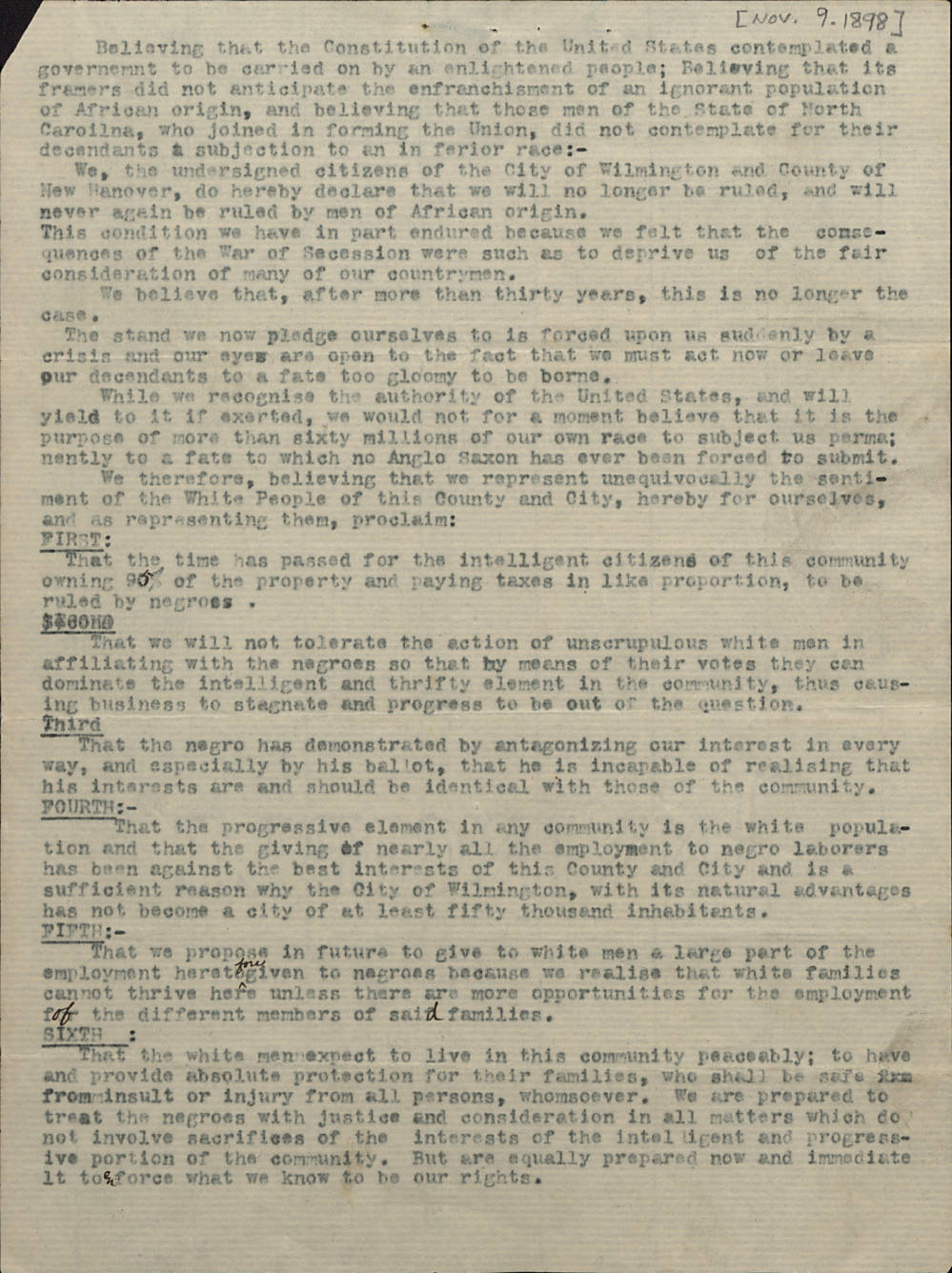 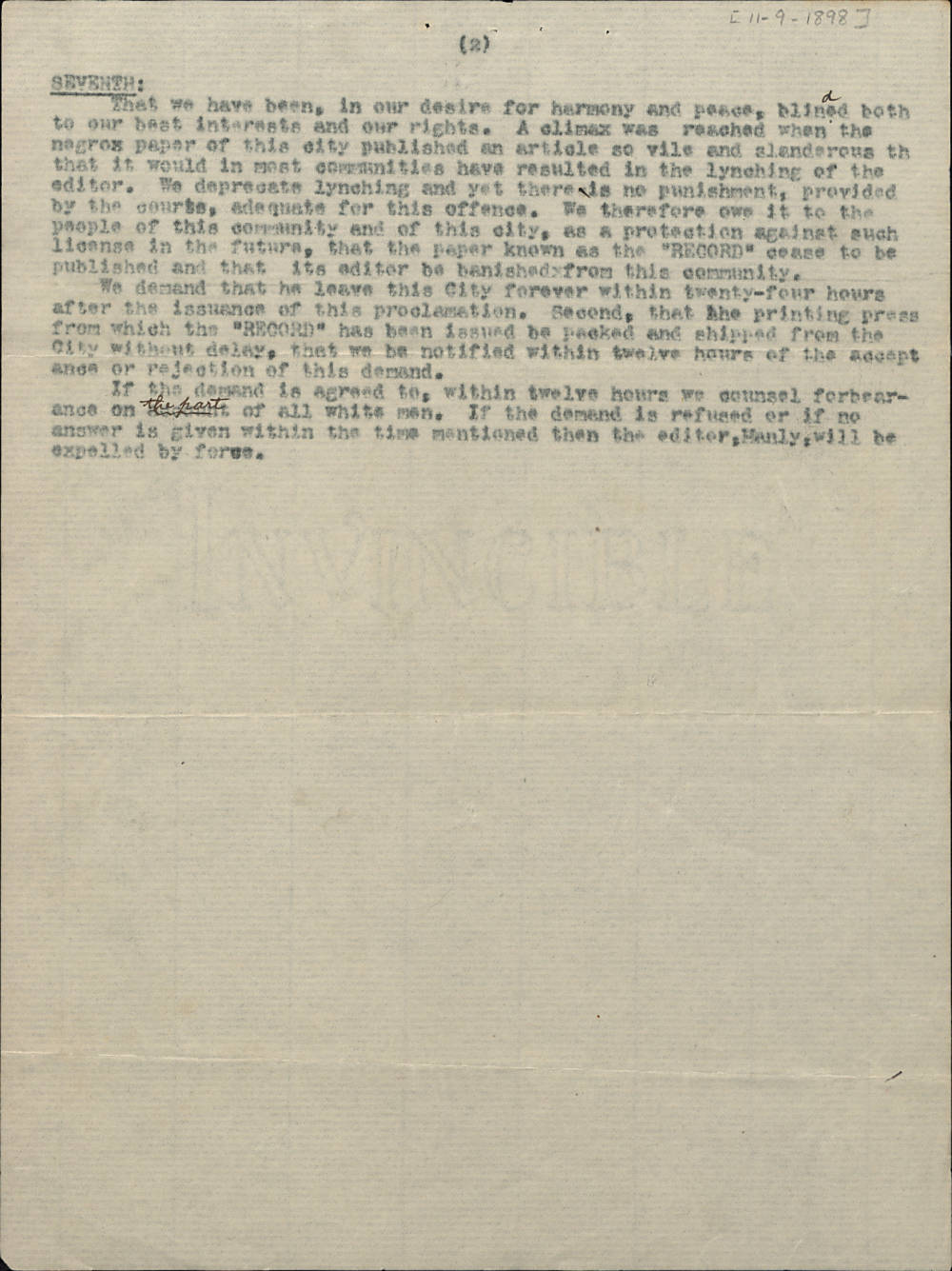 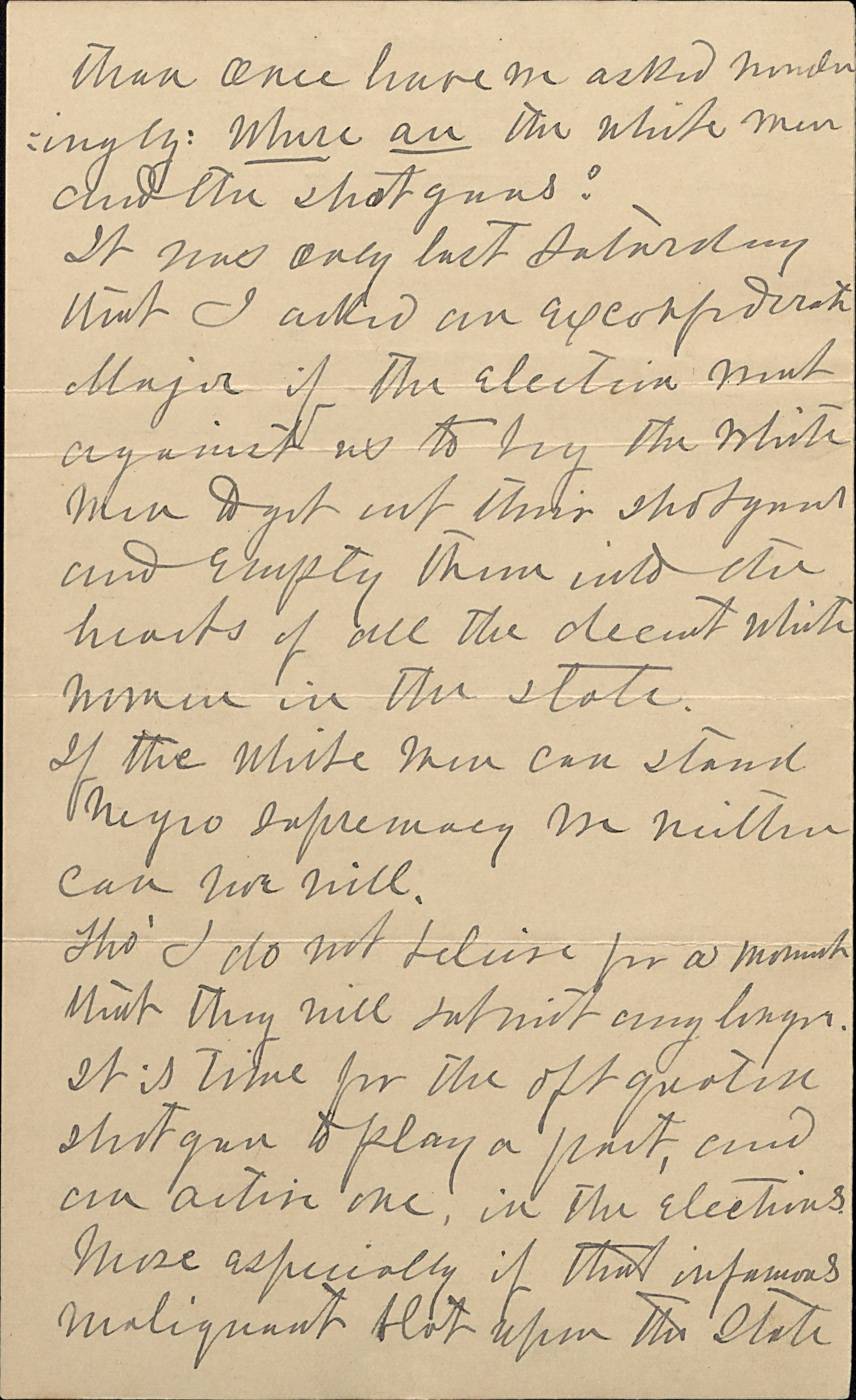 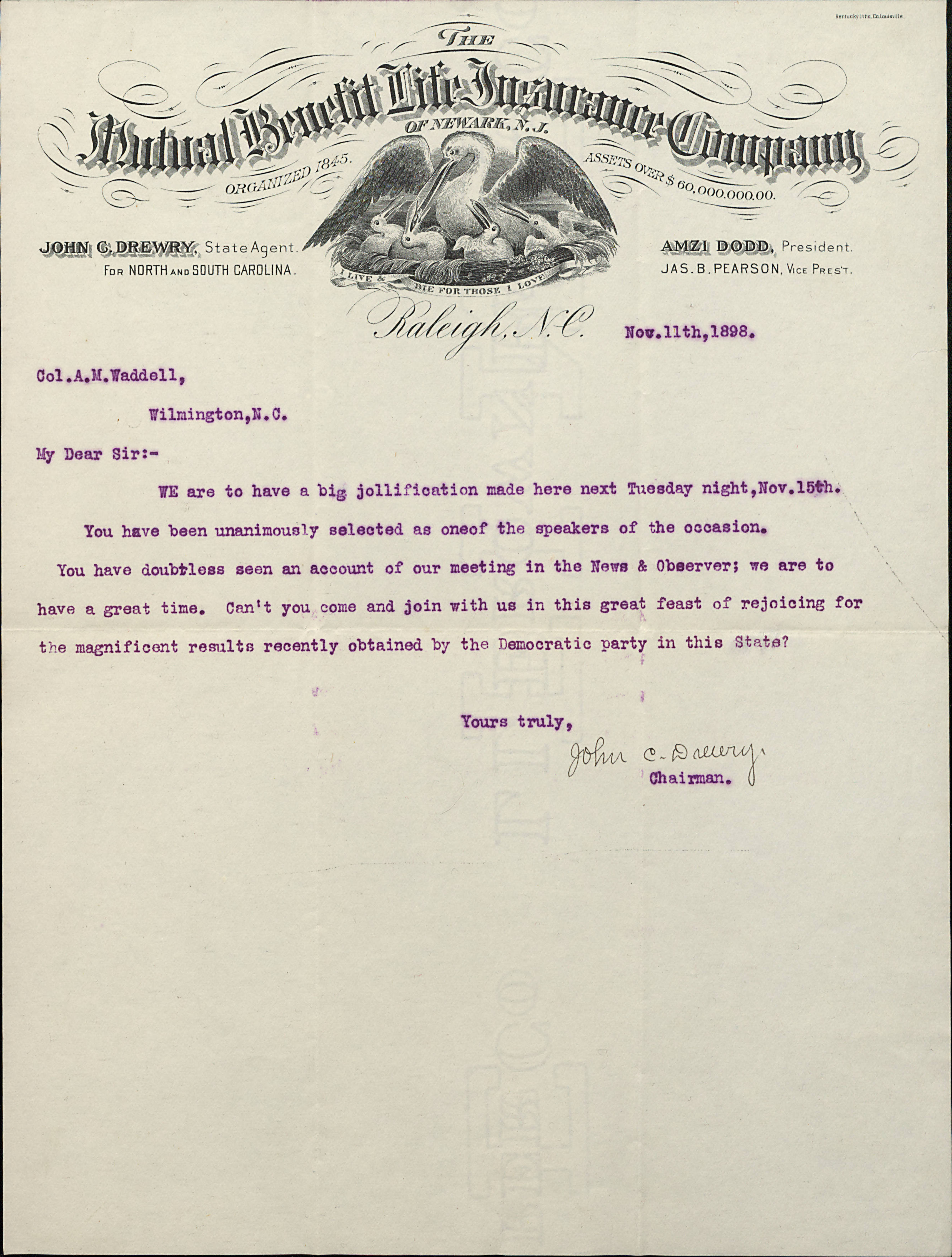 Examples from the letters sent to Alfred Waddell preceding and following the November 10, 1898 coup and massacre. One dated October 26, 1898 from his cousin Rebecca Waddell Cameron states, "If the white men can stand negro supremacy we neither can nor will. Tho' I do not believe for a moment that they will submit any longer. It is time for the oft quoted shotgun to play a part, and an active one, in the elections." The Cameron Family Papers are held at Wilson Special Collections Library. Many letters congratulate Waddell on the "success" of the coup, which in part culminated in Waddell himself becoming Mayor of the City of Wilmington. 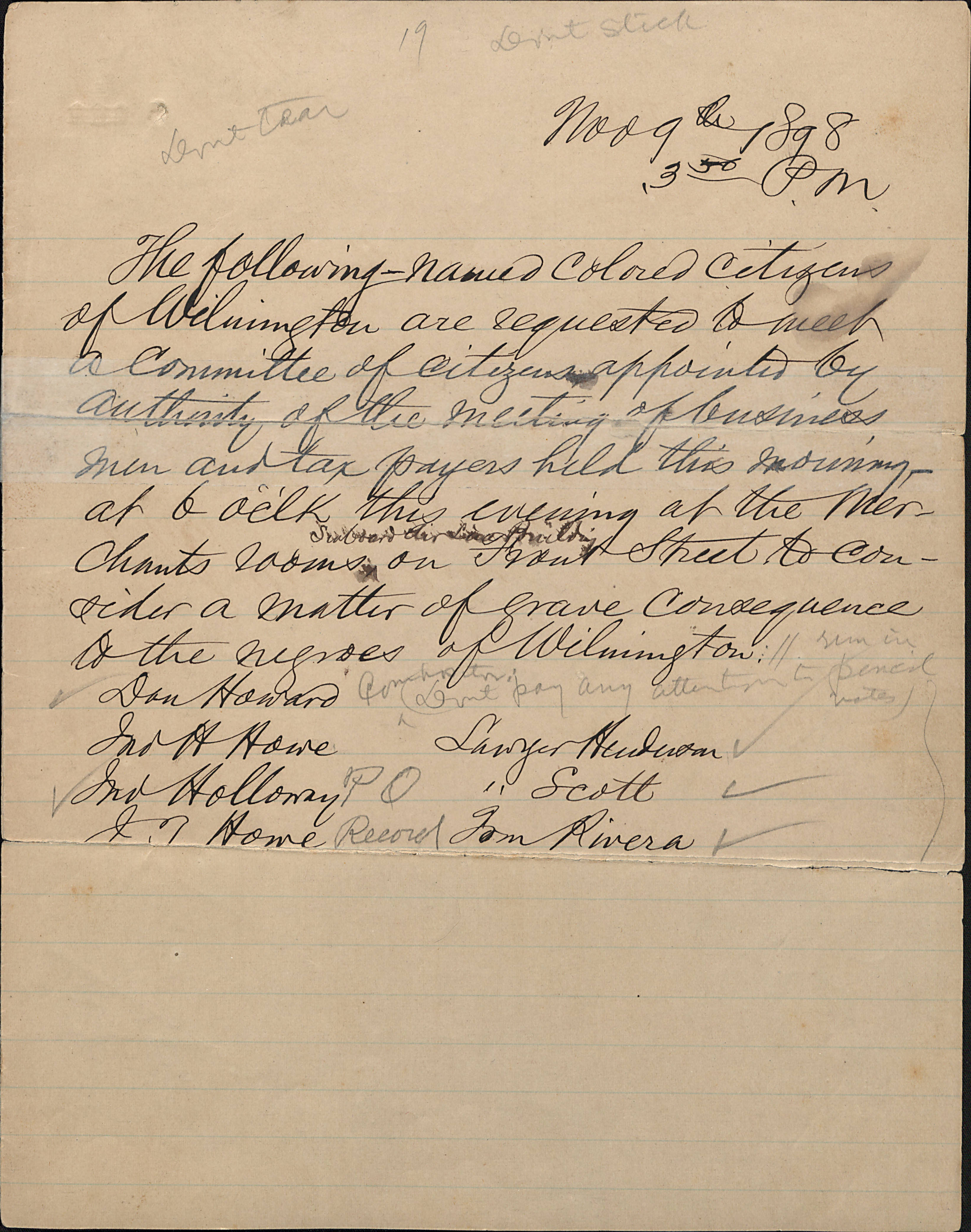 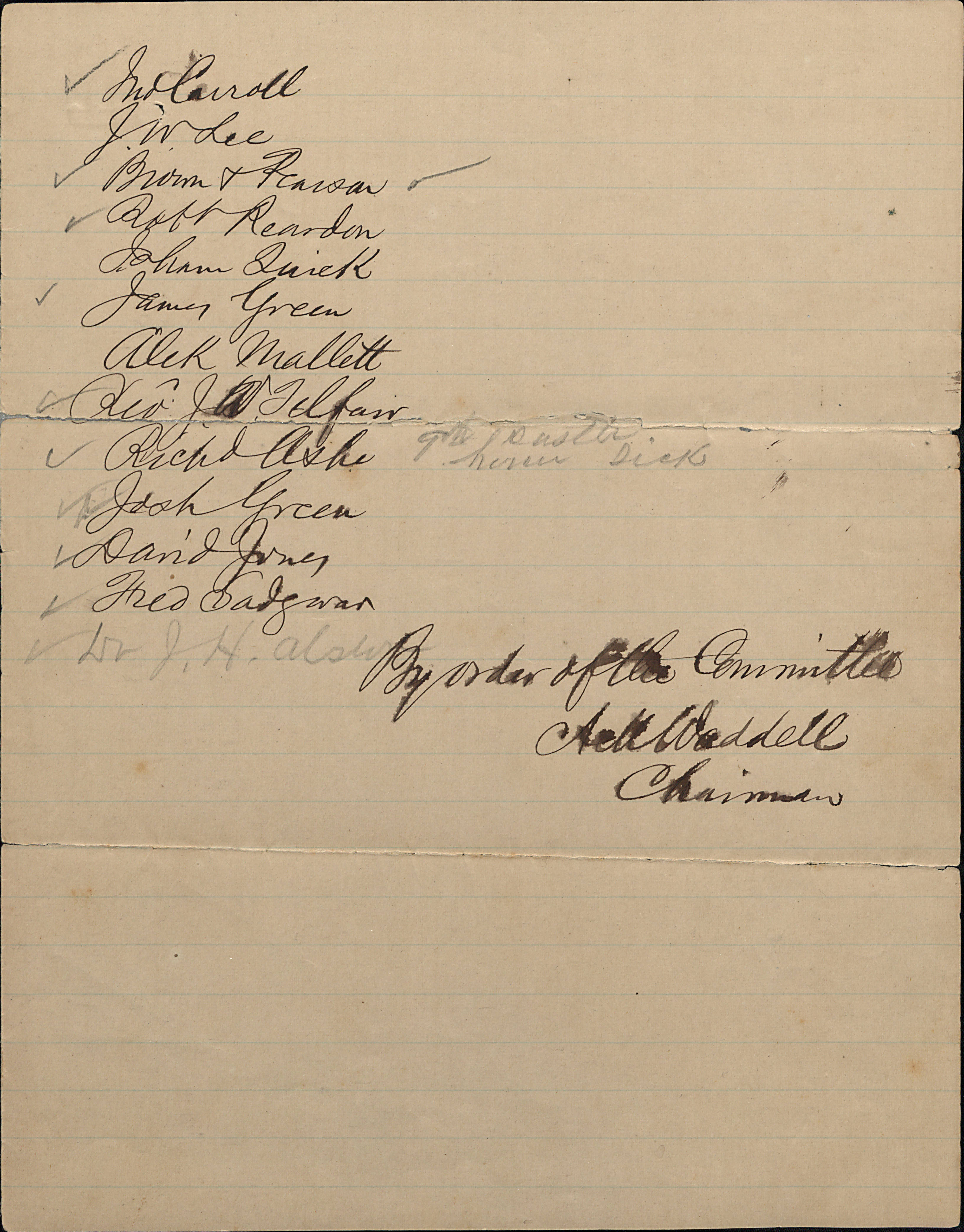 List of African American citizens summoned by Waddell and other leaders of the white citizens group dated November 9, 1898 3:50 pm. Listed:

Manuscripts from the Bennehan Cameron Papers 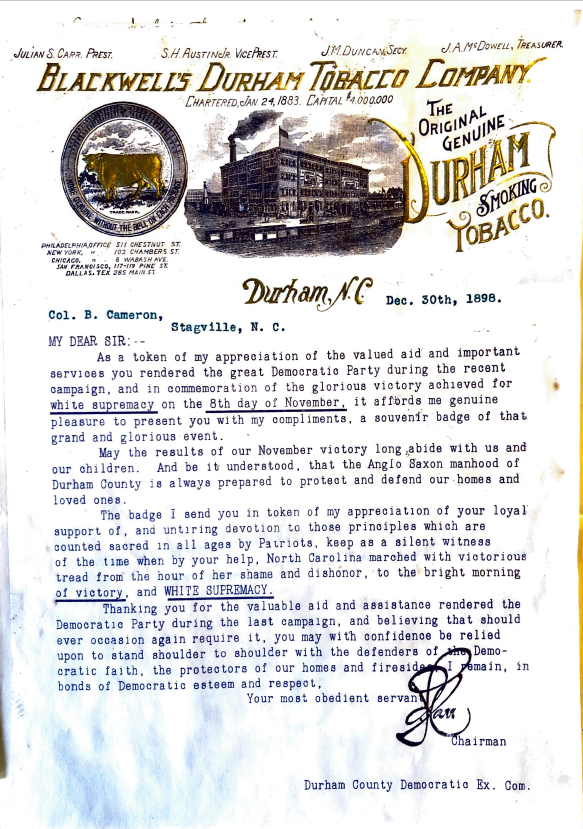 Letter from Julian Shakespeare Carr to Bennehan Cameron, December 30th, 1898, thanking him for his support of the white supremacy campaign and celebrating the Wilmington coup and massacre. In Folder 275 of the Bennehan Cameron Papers.

There was a riot of colored men in Wilmington, and my father organized a volunteer company of men with all kinds of rifles together with a riot gun on a wagon and they cleaned up the riot very quickly, although they were compelled to kill several persons. He rode the wagon and directed the operation.

I suppose he would be described today in politics as a racist, in that he led, as a newspaper editor, the so-called campaign for white supremacy in North Carolina.

The News and Observer was relied upon to carry the Democratic message and to be the militant voice of White Supremacy, and it did not fail in what was expected, sometimes going to extremes in its partisanship. Its correspondents visited every town where the Fusionists were in control and presented column after column day by day of stories of every Negro in office and every peculation, every private delinquency of a Fusion office-holder. By the first of October the Party was one solid mass, organized like an army, and word sent out from headquarters was taken up with zeal in the whole State.

He knew little about politics or the political situation but caught on rapidly. After a bit he was relieved of his work as clerk. He and I would confer daily upon the character of the cartoons. He eagerly devoured the editorial page to see what I was writing about. He would then draw a suggestion of a cartoon and bring it in to me and we would decide together what particular Republican or Populist deserved to be hit over the head that day. ...He drew pictures at a time when people were superheated. He pilloried men the Democrats hated. ...I do not know how we could have gotten along in the campaigns of 1896 and 1898 without Jennett's cartoons.

Negro politicians, often illiterate, always ignorant, generally corrupt, presided over the inferior courts, dominated county school boards and district school committees, and served as county commissioners and city councilmen. They were found on the police force of the State's chief city, they were made city attorneys, and they were numbered among county coroners, deputy sheriffs, and registers of deeds. Lawlessness, violence, and corruption followed. In some of the counties the situation became unbearable, while in such towns as Wilmington, New Bern, and Greenville neither life nor property nor woman's honor was secure. Governor Aycock did not exaggerate the situation when, in his Inaugural Address, he declared that during those years of negro rule "lawlessness walked the State like a pestilence -- death stalked abroad at noonday -- 'sleep lay down armed' -- the sound of the pistol was more frequent than the song of the mocking-bird -- the screams of women, fleeing from pursuing brutes, closed the gates of our hearts with a shock."

- from Chapter 5 "The Menace of Negro Suffrage" by R.D.W. Connor and Clarence Hamilton Poe, in The Life and Speeches of Charles Brantley Aycock, published by Doubleday in 1912.

We have taught them much in the past two years in the University of White Supremacy, we will graduate them in August next with a diploma that will entitle them to form a genuine white man's party. Then we shall have no more revolutions in Wilmington; we shall have no more dead and wounded negroes on the streets, because we shall have good government in the State and peace everywhere. The Governor of the State and the Senators will not be afraid to speak anywhere, for freedom of speech will become the common possession of the humblest of us. Life and property and liberty from the mountains to the sea shall rest secure in the guardianship of the law. But to do this we must disfranchise the negro. This movement comes from the people. Politicians have been afraid of it and have hesitated, but the great mass of white men in the State are now demanding and have demanded that the matter be settled once and for all. To do so is both desirable and necessary -- desirable because it sets the white man free to move along faster than he can go when retarded by the slower movement of the negro; necessary because we must have good order and peace while we work out the industrial, commercial, intellectual and moral development of the State.

We unfurl anew the old banner of Democracy. We inscribe thereon "White Supremacy and Its Perpetuation." Under that banner we shall win and when we shall have won we will have peace in the land. There will be rest from political bitterness and race antagonism. Industry will have a great outburst. Freed from the necessity of voting according to our color we shall have intellectual freedom. Error will come face to face with truth and shall suffer that final crushing which the poet denies to truth. With freedom of thought will come independence of action and public questions will stand or fall in the court of reason and not of passion. To these great ends I beg your unceasing activity during the present campaign. Let your work be with zeal and earnestness. Remember that the peace of the State is at stake. Do not forget that the safety of our women is dependent upon it. Ladies refugeed from Wilmington in 1898 as they did before the advance of Sherman in 1865.