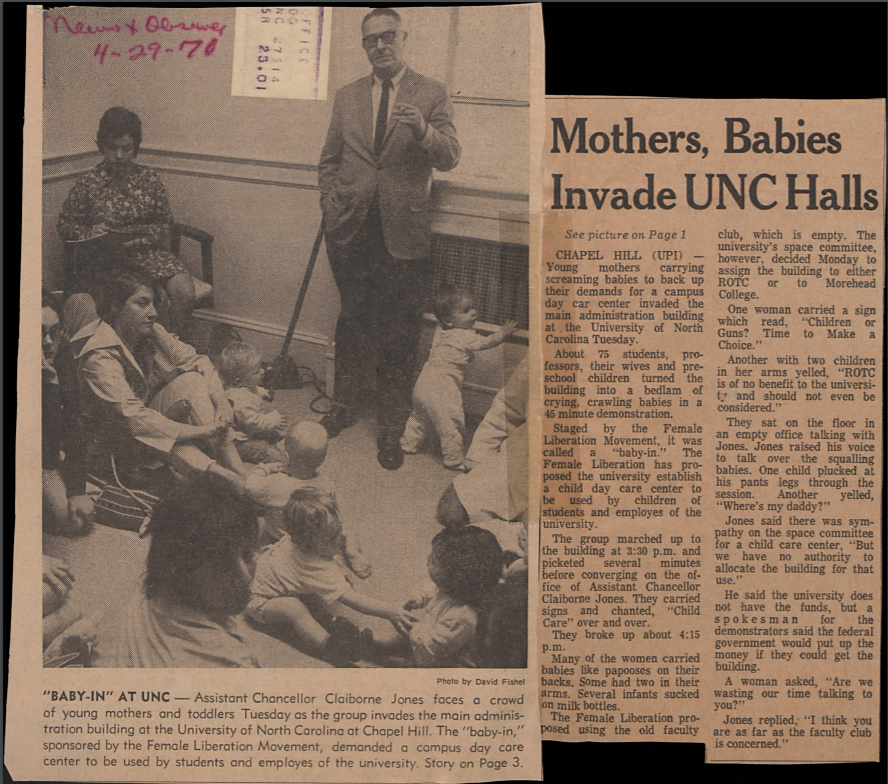 "Activism" is student-led organizing, protests, and movements on campus.

Students for Economic Justice of the University of North Carolina at Chapel Hill Records, circa 1999

Students for Economic Justice was a student organization at the University of North Carolina at Chapel Hill active in the anti-sweatshops protest movement at the University in the 1990s. Records consist of handwritten posters created by Lorrie Bradley, Marion Traub-Werner, and other members of Students for Economic Justice during workshops with student and community groups. The posters include information about the conditions of workers and proposed plans for a code of conduct under consideration by the University.

The UNControllables, founded in 2013, is a University of North Carolina at Chapel Hill student group that promotes anarchism and the dismantling of oppressive hierarchical, capitalist structures. The group hosts events including talks and the annual Radical Rush week, a week of radical political events designed to orient first-year students to radical politics. The records include flyers and posters advertising group events and Disorientation guides that describe campus and community activist organizations including a calendar of events, a map of Chapel Hill and Carrboro businesses, and a summary of incidents, controversies, activist events and initiatives from the past year.

Carolina Union of the University of North Carolina at Chapel Hill Records, 1931-2014

The Addition of October 2011 consists of files on student organizations that applied for official university recognition during the 1980s and 1990s. Of potential interest: Black Women United of UNC-CH (Box 6), Feminist Alliance (Box 9), etc.

Office of the Vice Chancellor for Student Affairs of the University of North Carolina at Chapel Hill Records, 1920-2004

The Vice Chancellor for Student Affairs has administrative responsibility for the university's Division of Student Affairs, which provides extracurricular programs and services for students and oversees student organizations and activities. Search page for "liberation"

Among many others, students Christine Glover, Hope Van Riper, Charliese Cotton were involved in Civil Rights activism at UNC and in Chapel Hill. See Floyd B. McKissick Papers, 1940s-1980s and John Ehle Papers, 1918-1993.

Anne Queen, director of what was then the YMCA-YWCA, was also a presence.

A variety of materials here potentially related to campus activism.

Students led the fight for a Black Cultural Center. This culminated in the building of the Stone Center. Records of student activism surrounding this issue are in numerous collections including Sonja Haynes Stone Center for Black Culture and History Records, 1984-2013 and Office of Chancellor of the University of North Carolina at Chapel Hill: Paul Hardin Records, 1988-1995 (Box 2:5)

Print and Published Materials by Students

Activist Publications of the Campus Y

Interviews pertain to the history of racial justice movements at the University of North Carolina at Chapel Hill from 1991 to 2018, with a focus on the student-led movement for a free-standing Black Cultural Center (Sonja Haynes Stone Center for Black Culture and History) from 1991-1993 and the 2014-2015 movement led by the Real Silent Sam Coalition to create Hurston Hall. Interviews include discussions of personal experiences with institutional racism, reflections on the racialized landscape of the campus, workers' movements and labor activism in Chapel Hill, and the legacy of past racial justice campus organizing for contemporary movements. Other topics discussed include the housekeepers' movement of the 1990s, early efforts to challenge Saunders Hall in the 1990s and 2000s, the role of collegiate athletics in racial justice movements, the impact of the University's academic-athletic scandal on Black students and faculty in the 2010s, black women's leadership in campus organizing, and the legacy of the University as a site of enslavement.

University of North Carolina: Anne Queen and the Campus Y

Interviews pertain to the Campus Y, a UNC Chapel Hill student organization established in 1859, and to Anne Queen, its director from 1964 to 1975. Most of the interviews with former Campus Y student leaders, alumni, staff, and university administration were conducted in 1990 by C. Cheatham and in 2010 as part of the 150th Anniversary celebration of the Campus Y. Interviews include recollections of personal experiences with the Campus Y, reflections on social justice movements and students' development of social consciousness, and advice for students who become involved with the Campus Y. Major topics include Anne Queen's directorship and other staff support, student leadership and community, work in post-college life, and the 150th Anniversary. The Campus Y spurred the creation of UNC's campus bookstore and the institution of first-year student orientation, intramural athletics, and the Carolina Symposium. It participated in the launching of the Student Environmental Action coalition (SEAC), the Student Coalition for Action in Literacy Education (SCALE), and Nourish International. The Campus Y was involved with the integration effort in UNC's undergraduate program, the local civil rights movement, Vietnam War and anti-apartheid protests, the overturning of t he North Carolina speaker ban law, the Foodworkers' Strikes of 1969 and 1970, and other major social movements.